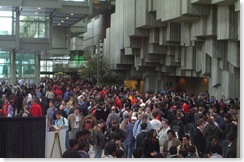 My first day at Seattle is officially over. The day began with the super Sean O’Driscoll’s keynote and continued with a series of open discussion sessions between MVPs.

The first one that I participated was on ASP.Net Webform development and the new MVC framework. From the discussion I realized that a lot of people consider MVC as the future web development technology, one that will eventually replace ASP.Net Webform development. They see those two technologies as opposing one another, while in my opinion MVC Framework is just another tool that developers can take advantage of in order to satisfy specific sets of requirements.

OK, as far as productivity is concerned ASP.NET is currently better than MVC (dragging a GridView in a designer is far easier than hand-coding it in HTML) but I believe that that’s something temporary till Microsoft releases the official version of the Framework. On the other hand, some argued that MVC is better since you can can develop web applications that are more Testable, agile and so forth but I believe that that is the case only when you’ve poorly designed the Webform one. You can build models, Controllers and Views without necessarily using MVC framework by just following some patterns. So the key factor that should guide your decision to choose one over the other should be wether or not you need the full Page lifecycle, event model, Viewstate and so on or just a simpler model to present the data.

Next I followed a discussion on ORM’s where a lot of interesting ideas, and tools (like Linq To SQL, IdeaBlade, and Entity framework, were discussed and compared. Unfortunately it wasn’t as technical as I expected, so I’m still pretty excited to meat Daniel Simmons tomorrow and discuss various issues with him. And the day closed with the Competency Teams Receptions and Regional Teams launch.