If you were following my latest blog posts (those of you that didn’t you really should ;-)) you’ll already know that I’ve been working with popfly lately. Well let me tell you all about it.

Just a week back the early technology adopting Lambrakis press development team decided to give Silverlight a go at the 2007 Greek national elections. I was assigned with the task of creating a Silverlight graphical representation of the election results.

After investigating my options for a while (I’m always looking for what’s available before diving into code) I came to a dreadful conclusion, there wasn’t anything ready I could use (“yet” -Silverlight was just released after all) and I didn’t have time to implement everything from scratch. I had to re-use something if I wanted to make it ([email protected] this pre-election period was short). Thankfully I remembered Popfly, and as I discovered there were a lot of components (blocks) ready to be used or customized (ripped) to anyone’s needs. Popfly it was then.

After a full 2 days development 😉 my Greek Elections 2007 Silverlight Bar graph was ready to be used.

As you can see from the mashup diagram, all I really had to implement was a block (GreekElections) that would consume an XML feed containing the election results and then pass those to the Bar Graph block I had found at popfly… Well I had to tweak the bar graph a little to accept the data I was providing as well as display a custom title but other than that it was really pretty straight forward. I finally used a timer block to update my graph on a given time interval and two user input blocks to specify the prefecture and municipality for which the results were for and that was it (pretty much). 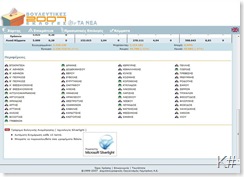 The resulting Popfly Silverlight Bar Graph will be available at the night of the elections at http://national07.ekloges.dolnet.gr/. Once there you’ll have to select a prefecture, municipality or see the nationwide results then scroll down to the end of the page and click the link.

You’ll be able and have as many windows opened as you like on your desktop and watch them refresh automatically (using Ajax technologies) every 10 minutes.

P.S. Kudos must also be given to Thodoris (The Hipstairs one ;-)) for providing the necessary feed, Fotis for embedding the Popfly mashup to the DOL election results site but above all Stelios, my boss, for encouraging me to complete this.